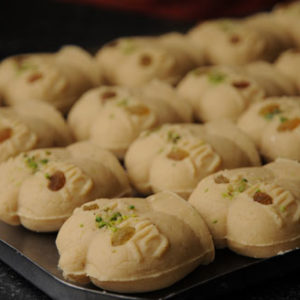 In entire Gangtok there were only two sweet shops, Laxmi Sweets and Dey sweets. The former sold only ladoo and peda. The later apparently sold Bengali Sweets. However, there was a rumour that Dey Sweets landed people in hospital with diarrhoea.

Hospital and Gangtok had a troubled relation. Most of the time the hospital ran without doctors or nurses and patients had to run to Siliguri, which was 5 hours drive, to get treatment. Therefore, people avoided sure shot disease inducers and Dey Sweets.

Hence, when my Mejo Mama (maternal uncle) arrived in sweet-starved Gangtok with four boxes of sandesh from Ganguram one can imagine the royal treatment those boxes received. As soon as those boxes arrived, my mom spread the good news among the Bongs and the entire community started salivating in expectation. My mother already had the reputation of distributing good food within the community. Whenever she made any delicacy she used to distribute everything leaving only few crumbs for me and my dad. While the neighbourhood gorged on her food we made peace with only one or two broken pieces. Ma had similar plans of distributing sandesh with the tagline ‘aha re ora esab khete paina ekhane, ektu di’.

The sandesh  baksho was kept in tight security away from the five kids. Mom had a doubt that the sandesh wouldn’t be safe around all these kids. The five kids were two sons of my mama, the daughter and son of his friend who had come along with him and stayed in our house and yours truly.

In the afternoon Mom took out the box of sandesh from her secret hideout the way villains in 70’s Hindi movies take out gold biscuits from secret rooms behind camouflaging doors that look like a bar. She took a part of that treasure in a Tiffin box and kept the remaining sandesh back. The adults then went for a tea invitation to a friend’s place leaving all the five kids behind. That was hara-kiri!!

We kids were waiting for this since a long time. We knew that if we do not grab the sandesh we would only get leftover crumbs. Thanks! To my Mom’s social service of feeding starved Bongs nolen gurer sandesh in Momo-land. We initiated mission “sandesh churi”. The mission comprised three of us me, my younger cousin and the son of my mama’s friend. Just like a police sniffer dog all three of us started searching the sandesh with the music “teng terang, terang terang terang, terarira!!!” playing in our minds. We started with the kitchen but my super intelligent cousin who shares his genes with my mom was smart enough to understand quickly that his Pishi(Aunt) is no fool and keeping sandesh in kitchen is a throwaway. So we shifted to the dining hall. After searching everywhere there was no luck. Then we went to the bedrooms, no luck there either. Finally we saw the loft in the living room above the fire place. I believe those who share genes think alike and again this time it was my cousin who was convinced that the loft was the place to go. However, now we had a problem, the loft was pretty high above for three of us who were in the age group of 6-8 years. Even with the help of a chair the loft was lofty for us.

The elder cousin was comfortably sleeping in the next room. Initially we had not inducted him in our mission, but now ‘the need of the hour’ was to include him. All three of us went and screamed into his ears and he woke up in a manner as if he was electrocuted. We told him about our plan, and he turned a Mir Jafar. He said he would tell the adults that we were trying to steal the sandesh.  The terrific trio were not scared of him and ignored him and went ahead in our mission without him. Three of us came back to the living room and started forming a human pyramid. We had dragged the centre table below the loft, on top of it the friend’s son formed the first row, my cousin formed the second and yours truly was on top. That time I didn’t know the song “ala re ala gobinda ala” or would have sung that while climbing the human pyramid. Our Govinda was successful in first attempt and we got our matki of sandesh.

Three of us sat with the four big boxes of sandesh. We had not even finished our first piece when Mir Jafar from the other room came inside and started threatening with dire consequences. We were smart kids and knew from very early stage how to control a detractor. Either fight or bribe. Fighting would have weakened our defence against adults as they would have charged us with both theft and attempt to murder. So the only way left was bribing. Each of us took a sandesh in our hands and encircled Mr. Jafar and then all of us pounced on him and started force feeding him the sandesh. Well, who needs to force feed nolen gurer sandesh?

The snadesh itself acted like a femme fatal. The seductress red curvy beauty with two raisins on top and nolen gur syrup inside touched his tongue and he was instantly ‘honey trapped’. Once Matahari conquered the traitor, three of us sang in a chorus “Tui o sandesh kheyechis, ebar bolle tui o bokuni khabi” (You also ate the sandesh, now if you tell, you will also get scolded). Mission accomplished!!

Initially we thought of stealing only few sandesh and then keep the box in its place as it is. We wanted to do it in such a manner that the adults wouldn’t suspect. Few missing sandesh from 200 sandesh was definitely manageable. However the temptation of nolen gur was such that we couldn’t stop at one. After a while all four boxes were empty.

The adults returned discussing how the family they went for tea enjoyed the sandesh. Mom was talking about her future plans to distribute it to the remaining others. While the adults were having animated discussion the four kids were sitting in absolute silence. After becoming a parent myself I know that when children are calm something is wrong. Looking at our calmness the elders must have had the same intuition that day. My Mom definitely had the gut feeling that her sandesh was in danger. She immediately headed for her secret treasure and to her horror found all the boxes empty. We four were sitting like statues. She could have killed us however my Mama came to the rescue and asked ‘ke kheyeche?’ (Who ate?) We said in a chorus ‘amra’(we). Mama asked ‘sobgulo?’ (All?)  We nodded together. My mom went into a state of shock but Mama burst out laughing and said ‘besh korechis, tobe ekta duto amader janya chere ditis’ (Very good, but could have left few for us). Looking at his smile all four of us sighed a sigh of relief and all of us burst out laughing together minus my mom who was still carrying on with her monologue ‘issh Mukherjee der dewa holona, ganguly da der dewa holona, saha ginni………….”