Today is Day 4 of Write Tribe Festival of Words #6. The prompt for today is : Feature a day in your life or someone else’s life. I feature the life of Lubna, a Syrian refugee woman living in a camp in the outskirts of Beirut, Lebanon. This is a fiction and any resemblance to any person dead or alive is coincidental.

Lubna woke up to the crying of Nizar, he must be hungry. She started unbuttoning her abaya to feed him. While unbuttoning, she saw a big rodent trying to nibble the hair of five month old Nizar. Horrified, she hurriedly picked up Nizar and shooed away the rodent. Holding Nizar tight in her bosom, she could feel her pounding heart.

Nizar felt comfortable in his mother’s chest and soon fell asleep. Lubna was scared to put him down on the bed once again. Her other three children were sleeping horizontally on the same bed, while she slept vertically with Nizar. This is how they sleep every night in this tent, since last eight months.

She put Nizar on the bed and asked her daughter Ranim to keep a watch. Ranim is the eldest of her four children and she is eleven years old. Lubna came outside the tent and went to stand in the queue to use the toilet. There is only one toilet for 10 tents. Lubna prefers to get done with her toilet work before others wake up. However, she feels scared of the Lebanese men who often roam around in the wee hours of the morning to prey on young Syrian refugee women. Lubna herself narrowly escaped getting kidnapped twice. Carefully, she went near the toilet and to her relief, found it empty.

She came back to the tent and asked Ranim to go and use the toilet as it was still empty. She woke up her second child Rifat to accompany Ranim, as it was not safe to leave her alone. Small girls are also not safe in these camps. Nizar was sleeping peacefully and Lubna thought of utilising the time. She went to her makeshift kitchen in the corner of the tent. She looked at her food supply and felt they were sufficient to survive two days. She had redeemed her refugee food coupon the previous day only.

She started cooking. Suddenly she heard a loud thud. She paused for a moment and carefully tried to hear. She heard a woman crying from the neighbouring tent, must be Yana. Lubna is not fond of Yana. She often fought with Yana in the toilet queue or in the queue for food coupons. Yana is one of the few women in this camp who live with her husband. Most women in this camp are either widowed or abandoned. Yana is often envied by other women for this privilege. She is also the one who stayed home and most importantly other men were scared to approach her. However, Lubna knew that Yana got beaten by her husband almost every day.

Yana’s screams became louder. Lubna came out from her tent and saw that a small crowd had gathered in front of Yana’s house. Ranim and Rifat were also in that crowd. Yana’s husband was beating her mercilessly. Not a single person from the crowd came forward. Lubna watched Yana getting beaten for some time and then she couldn’t control herself and went and snatched Yana away from her husband. She stood in between Yana and her husband. Yana was clinging to Lubna like a frightened child clinging to her mom. Yana’s husband got embarrassed, probably, at this sudden defiance and retreated back into his tent.

Lubna brought Yana to her tent. Yana was crying. Lubna gave her a glass of water and asked what had happened. Yana said that she was raped by a man the previous night. Lubna was not shocked because she had got used to hearing stories of rape or sexual assaults among her fellow Syrian women in this camp. Lubna herself was molested by her previous employer once, which she couldn’t even report to the police as she didn’t have a proper residence permit then. She knew that reporting meant she would be sent back along with her children.

Yana went on narrating her story. She was taking her daughter to the hospital in Beirut when a Lebanese man came and offered her a car ride. He looked decent and Yana wanted to save money and time. So, she accepted his help. The man stayed with her till the time her work in the hospital was done and offered her to drop back home. While returning he asked Yana to spend the night with him. When she refused he forced himself on her. Then he dropped her home. She was shattered and when she told her husband about this he started accusing her for this. Instead of supporting her he started beating her mercilessly and even threatened to divorce her.

Lubna looked at the small watch in her tent and it was quite late. Her children were hungry and she hadn’t finished cooking. She also was getting late for her work in the clothing shop, where she works as a tailor.

Today was the weekly pay day and she didn’t want to miss it. Her employer often deducts money at his whims. Once, he paid Lubna so less that she literally begged on the streets to meet her rent for the tent. Her tent owner doesn’t allow even a day’s late in payment.

She finished cooking fast, she even cooked for Yana. She left the house and asked Yana to stay. A part of Lubna was relaxed that today there was someone in the house to look after Nizar and the other kids.

Once inside her workplace Lubna hardly got time to do anything else. At times, she even held going to the washroom. She and all the other women didn’t even take a lunch break. They got paid meagre amount for the inhuman work they did throughout the day.

When her work got over she felt too tired to walk back home but bus fare was a luxury. When she reached home she saw Tarek sitting inside the tent. All four kids were playing happily around Tarek. Yana was nowhere to be seen. She must have gone back to her tent. Tarek smiled happily at Lubna. Nizar was happily sitting on Tarek’s lap. Tarek looked thinner but happier. The other three children Ranim, Rifat and Riham came and surrounded Lubna as soon as she entered the tent. Almost in a chorus they said “Abbu says we are going to Germany”. Lubna was happily surprised at this. Eight months back when Tarek left a six months pregnant Lubna and her three children, he had promised that he would return after making arrangements for them to shift to Europe, Lubna didn’t believe him. She had felt that like all other men he was also abandoning her along with the children. However, today she was happy to be proved wrong. She smiled shyly at Tarek and rushed towards her small kitchen to make something nice for him. Tonight, she knew she would sleep peacefully after a long time.

I am taking part in Write Tribe Festival of Words#6. 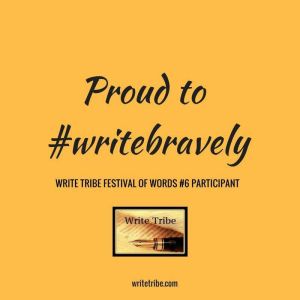