Today is the twenty sixth day of November. I shall remember this day to my grave. Probably, many other Mumbaikars would do the same. This is one of the darkest days in the history of Mumbai and for me this is the scariest day of my life. This day gives me shivers even nine years later. 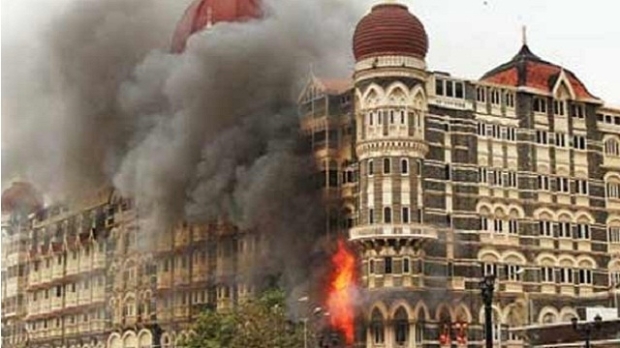 26th November 2008 started like any other day. In the morning Mumbaikars had no idea what was lurking in the shoreline of this maximum city. My Hubby D left for office as usual.  I was six months pregnant then. When he left in the morning I like any other Mumbaikar was unaware that simultaneously a group of armed men were also sailing towards Mumbai to launch the deadliest of all attacks.

In the afternoon I went to the market and bought Hilsa fish. November is not really the season for Hilsa but I was having a hormone induced craving for Hilsa therefore under compulsion I bought some heavily priced frozen Hilsa from Hypercity. After coming back home I grinded mustard, slit green chillies and prepared my steamer to make Ilish Bhapa, a dish that always reminds me of my Thakuma.

Just before ordering main course D called home once again just to check if everything was fine with his pregnant wife. He casually asked me what was for dinner at home and when I said ilish bhapa D faced a dilemma. D loves fish and like any Bong ilish is his favourite fish and the temptation of ilish bhapa was too enticing to ignore.  In a blink he asked his friends not to order main course for him as he was heading back home to have dinner with ‘wifey’.

He came out of Leopold and took a taxi to reach CST. Minutes after D left Leopold two young boys in their twenties dressed in T-shirt and jeans carrying rucksacks entered the restaurant. They looked like college goers looking for few drinks at the cafe. Nobody gave them any attention. However these boys knew how to gain the attention of not only the customers of that cafe but also scare the entire nation and the world.

These two boys took out AK 47 and started shooting haphazardly. S who had not yet started eating his dinner was the first person to fall prey to the bullets. He died instantaneously. The other friend M suffered severe bullet wounds. He died the following day unattended in a Mumbai hospital while his family was frantically searching for him in every hospital and every morgue.

D was unaware of all this. He was happily coming back home to the smell of mustard and green chillies.  D entered CST and boarded a train from platform no. 1. It was the last train to leave on that fateful night before CST was turned into a death zone. Soon after Pakistani gunmen Ajmal Kasab and Abu Ismail entered CST and started rampant firing.

I was surprised to see D back home so early. Ignorant of what was happening we happily sat for dinner, we relished our ilish bhapa licking mustard paste off our fingers. After dinner we sat to watch TV and saw breaking news of some firing in CST and Leopold. Things were not yet clear. D tried calling his friends S and M but their cells were switched off.

After the uneasy night, the following morning we came to know that the wedding of S has been replaced with his funeral. His fiancé who was looking for honeymoon hotels would now be sent to a mental rehabilitation centre in Switzerland to get over the trauma. It took three days for M’s old and ailing parents to claim his “unidentified” body from the morgue. I went into paranoia and had to be immediately hospitalised and put on sedatives. Thankfully my baby was safe. However, his premature delivery was linked to my trauma post 26/11.

It is nine years but the memory is fresh as if it happened yesterday. Each day when I wake up in the morning and see my husband and child I thank God. However I am always anxious till the time they come back home. We live in a time when our life depends on the crazy whims of people with guns and bombs. We are not safe in roads, restaurants, shopping malls and even in schools and hospitals.

On this day I pray for their souls and for all others who lost their lives in this mindless killing. I thank almighty that D had a narrow escape. I also pray for all those jihadis who died. My Christian missionary education taught me “Father, forgive them, for they know not what they do”. May this mindless killing stop! Amen!