When my flight was about to touch the runway of Charles-De-Gaulle airport, I could see the thick clouds from the small window of the plane. Within moments rainwater lashed on the windowpane with a loud crackling sound. I understood that Paris was welcoming me with rain and thunderstorm. This was not exactly what I would have preferred. However, what else could I have expected in November end?

Charles de Gaulle was confusing enough to make me run from one direction to the other in search of the exit. In the flight, there was another Indian guy, I found him equally fumbling, looking for the exit. I went near him and asked, “are you looking for the exit?” He nodded excitedly, the usual excitement that we feel when we meet another confused desi in a foreign land. He said he was doing Ph.D. from IIT Delhi and had come to Paris for a seminar. The ‘introductory’ conversation went on while we searched the exit.

As the saying in Hindi goes “ek se bhale do” and together we found the exit. We took the airport shuttle and went to Terminal 1 from where we wanted to take the airport train to the Gare Du Nord station in Paris city. The airport internal shuttle is free but for the RER train, we had to buy tickets.

There was a huge queue in front of the ticket vending machine. We stood patiently and then when our turn came we fumbled. Our forex cards were not working and we had no coins. Helplessly we looked around and an African-French man came to our rescue. He patiently explained us the process and even stood there like a diligent teacher till we got the tickets. “Merci Beaucoup” I said before leaving.

The view of rainy Paris suburbs from the train was mesmerizing for our third world eyes.  We were enjoying every bit of the suburbs and French countryside. The empty stations, the small row houses, the leafless branches, the almost empty roads were just magnifying our French infatuation. However, the infatuation didn’t last long as soon factory chimneys and malls started obstructing views. The view inside the train was also like a distant cousin of our very own Virar local with beggars and homeless people asking for money exactly the way they do in India. Well, not exactly the same because here beggars are literate and they distribute leaflets to beg. In India, beggars appeal to your pity but in Paris, they appeal to your guilt. 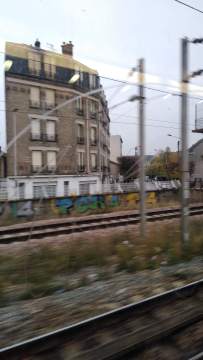 When foreigners come to India they make it a point to click the photos of poor people, our dirt, our slums, our beggars and our potholes. Maybe this is the time we Indians also start doing the same. We should also start clicking their potholes, homeless people, the beggars, the substance addicts and other street urchins that populate the streets of western countries. Strangely when I visited a small country Bhutan I did not find a single homeless person or a beggar. Yet all of us are busy fantasizing about the West. This time I even saw huge rodents running on the streets of Paris. The Paris metro was heavy with the smell of urine and the streets of Paris were full of dog poop.

The place where I stayed near the Gare Du Nord train station resembled a set for a mafia movie. The shops were full of Chinese goods. The streets were full of immigrants (probably most of them illegal) from Africa and Arab countries. The Estacao Barbes- Rochechouart metro station near my accommodation was one of the filthiest stations that I have ever seen.  Each time I went out the guy at the reception warned me of pickpockets. There was a Burger King outlet nearby and the girl at the counter also warned me of pickpockets and muggers. The place used to get really scary at night.

The “yellow vest” movement was brewing while I was in Paris and the whole city had an alarmingly anxious and tensed ambiance. Police and barricades were everywhere. The Christmas season was overlapped with the tensed atmosphere.  Paris is a dream destination for many including myself but the Paris I saw this time was very different from the usual city of lights, this time it looked dark and sinister. The cloud that welcomed me to Paris now seemed like an allegory.

28 thoughts on “Paris- Story of Immigrants, Beggars and Yellow Vests”